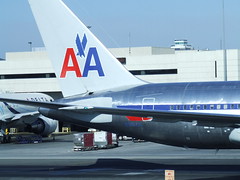 A lot has been made about American Airlines and their situation in the press as of late. They have had a very public dispute with their crews over contracts. US Airways has been making a lot of noise about a potential merger with everyone up to American's parent company. Pilots are being warned by their union not to cause trip delays. Even Florida Sen. Marco Rubio made his thoughts known after having flight troubles.

So for those travelling on the carrier, the question remains: should you be worried about a significant trip delay or trip cancellation when travelling American Airlines?

If I were you - which I am not - but if I were - I don't think I'd lose a whole lot of sleep over it. While I cannot guarantee that you won't experience a travel delay or missed connection, lets look more at some of the relevant evidence.

Yes, a lot is being made of American's issues as of late. But their performance, so far this year, is nothing out of the ordinary. According to the Air Travel Consumer Report issued in September, American's on-time performance at all reporting airports was on par with the industry average (76.4% compared to 74% across the table). Additionally, American and American Eagle had no chronically delayed flights on the report. Both of these are strong indicators that, while the carrier is operating under Chapter 11 protection, they are still going places - and most of the time, they get moving on time.

Gary Leff, who writes one of my favorite travel blogs (View From The Wing at Boarding Area), sums it all up very well:

All carriers have operational challenges, American has struggled over the past few weeks but less than they did in 1998 with pilot issues and certainly less than United did in the summer of 2000...The amazing thing is that problems don’t happen more often. None of which makes it less frustrating when your flight is delayed or cancelled, or you’re watching your connection time shrink by the minute while your pilot decides to taxi around the full length of the airport while being outrun by a tug.

Any time a common carrier goes through a bankruptcy, the customer ultimately suffers through it with trip delays and cancellations. But there are many different good and valid reasons to stick it through with them - be it preferred frequent flyer status, airline alliance loyalties (which could get very interesting for you American fans out there once the new oneworld partner is announced), or the fact that they are the cheapest airline out of your home port. In all events, headlines are hard to ignore - especially when they talk about the potential of trip delay and trip cancellation that can have a direct effect on your plans. But considering the evidence presented in on-time performance, it is this author's opinion that you can continue your travel plans as already developed.

Have you changed your travel habits as a result of carrier concerns? Let me know your thoughts in the comments below!