My 2013 Travel Resolutions
Avoiding Trip Delay at the Security Checkpoint 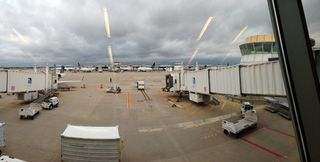 Greetings from my first mileage run of 2013! Yes, at a low cent-per-mile cost (which I probably still overpaid for), I was able to travel from Columbus to Cleveland to meet with my boss and executive editor...routed through Denver, and then Charlotte. 2,632 miles credited and one stay later, I'm that much closer to free lounge access and gold hotel status. I could get used to that way of life.

But I digress. On the flight from Denver to Charlotte, I ran into (you guessed it) a trip delay! A loose bolt caused the flight to be delayed. Ultimately, as I predicted in the terminal, I missed my scheduled flight to Cleveland. I was just incredibly grateful that they were able to borrow the bolt from another airline, as that one little maintenance issue could have turned into a trip cancellation. No matter. I was able to get on the airplane, where I shared travel stories and newspapers with the nice Scotsman beside me in row 24.

Armed with his copy of The Wall Street Journal, I immediately turned to one of my favorite annual reports: the 2012 Middle Seat Annual Airline Scorecard. I was most excited to read this, based on all of my persional experiences this year. With all the airline troubles, financial insolvency, weather operations, and mergers that took place last year, I couldn't help but wonder: did 2012 go down as the year of the trip cancellation?

Much to my surprise, the domestic airlines, as a group, actually did better in the categories of trip cancellation and trip delay this year! In fact, 79% of all flights arrived with 15 minutes of their scheduled time - this is a three percent improvement from last year. I must have been on the other 21% of flights that were not on time, but that's just my luck.

What about trip cancellation? Surely Hurricane Sandy and other airline disruptions must have caused more canceled flights? Also to my surprise, this was not the case. Only 1.4% of domestic flights were cancelled in 2012. This is down 0.7%, which is actually a great sign that things are going the right way.

But every silver lining comes with a cloud. The frequency of passengers getting bumped from flights went up, as well as the total amount of FAA complaints. In conclusion, domestic aviation is getting better. Travelers (who weren't me) had less trip delays, trip cancellations, and a better experience when flying. This is despite a long process of mergers and a volatile market that caused carriers to go bankrupt.

But what does this mean for 2013? The trend appears that companies are listening to the consumers, and understanding that in order to keep a happy and loyal customer, operations need to be as streamlined and simple as possible. However, your chances of having a trip delay while taking to the air is still about one-in-five (much higher if you're flying with me). But if you have travel insurance, suffering under a major trip delay or trip cancelation may be able to be alleviated  that much easier.

What does 2013 look like for you? What changes are you seeing in your travels? Are things really getting better, or are these metrics out of touch? Let me know your thoughts in the comments below!

Interesting topic you have in here. I run a tour organizer business in Bali and 2012 is actually better than the forecast of 2013 in terms of trip cancellation and incoming visitors in general to Bali (Indonesia). Early in 2013 we have a local airline bankrupt (Batavia Air), cancelling many charter flights and trips, a huge hit for the tour operators. I think what happen in 2013 will be more or less are the remaining impact of travel business conditions in 2012. Mix that with current politics, economics and natural (weather) conditions that still likely unstable, 2013 is a hard recovery or maybe worst than previous year.

This post is so clearly written and is meant for understanding and knowing facts. Great write-up. Keep going. Good luck.