Easy Way to Get Into Australia?
The Sequester and Trip Delay: The Good News Is…

Trip Delay from the Sequester: The New Normal? 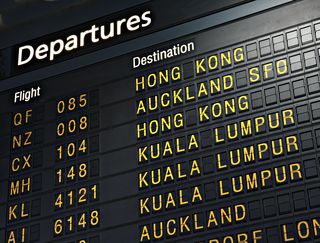 May could quite possibly be one of the wildest months in the history of air travel.

Let’s forget about the confusion that the TSA’s new regulations on carry-on items is going to create in the already wildly inconsistent system (that won't be implimented anyways - but that's a blog for another time). This week, furloughs created by the sequester are going to take full effect on airports across the United States. This will force unpaid time off to most of the 47,000 Federal Aviation Administration’s full-time employees – including air traffic controllers. Broken down, this means that air traffic controllers will have to take one unpaid day off every other week until the end of summer.

Already, the loss of the additional help in the air traffic control tower has resulted in trip delays for many travelers:

Taking a look at the FAA’s Flight Delay Information website on Monday morning, the only airports showing significant delays are those in the New York Area: LaGuardia and Newark. By the afternoon, the delay warnings expanded to Baltimore and Charlotte as well. And United started warning their customers to expect long delays for those travelers going to Los Angeles.

For the frequent traveler, this creates a major problem. Not only do you have to arrive early for your flight to check baggage and find a way to manage through the security checkpoint, but now trip delay or trip cancellation are almost a certainty. How can you make arrangements at your end destination if you have no idea when you’ll be getting there? What’s worse, how do you tell loved ones or business associates that your plans are in flux because of items out of your control?

So how do you plan for the sequester cuts? And how do you make the most of getting through one of the most difficult travel situations in a while? Here’s how I plan on managing my travel:

1) Alternate Routes – Alternate Destinations
To every destination, there is an equal and opposite destination. Okay, so maybe that’s not exactly the rule, but the logic still applies. For every place that we want to go, there are alternate ways and routes to get there. Let’s say you’re flying to Southern California and you don’t want to get stuck behind a trip delay, try looking at the airports in greater LA, such as Ontario, Long Beach, and Santa Ana. Subsequently, there are other ways to get around New York as well. For instance, flying to Philadelphia or Washington, DC, and taking a train into the big city.

2) Off-Peak Travel Makes Easier Routes
The main times people plan to travel are through the weekends and surrounding them. If your plans are flexible, then it’s entirely possible to escape trip delay by traveling off-peak hours – such as mid-week (Tuesday through Thursday), and overnight. By planning your travels around lower-traffic times, you can better control your itinerary.

3) Skip the Airplane Entirely
In some situations, it may make more sense to skip the airplane entirely and find a different way to get to where you’re going. Is a three-hour trip delay worth it if you can get there directly on a six-hour car ride? Is train service an option instead of a flight? While it may take you longer to get there, you can skip problems out of your control.

This coming season of trip delay will not be a fun one. But with some planning and forethought about your travels, I have faith that you will be able to make it through. How do you plan on managing your travel this summer? Let me know how you plan on getting through in the comments below!

Many experienced tourists will tell you that Cambodia is actually one of the most peaceful and lovely countries that you could find. If you want to find out more about how you can visit it and book a hotel you can go to http://discovercambodia.today/. If you want to visit somemplace exotic then you can be certain that Cambodia will not disappoint.