An Experience of a Dream(liner) 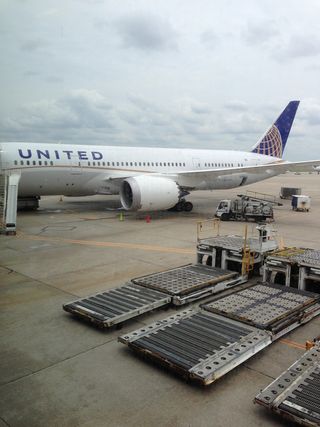 If you’ve been forced to spend any amount of time with me (either online or analog) in the month of May, you’re probably tired of every fourth word coming out of my mouth being either “Dreamliner” or “787.” I apologize now – I really couldn’t help to share how excited I was to fly one of these brand new airplanes across the United States. Needless to say, the hype that I put into this trip wasn’t a disappointment.

You might remember the 787 Dreamliner for the battery problems earlier this year, causing a mess of trip delays and trip cancellations. This caused the entire group of these brand new birds to be grounded indefinitely as Boeing scrambled to fix the overheating battery issue. By April, the problem seemed to be fixed and test flights were under way. The week before Memorial Day Weekend, the 787’s were once again being introduced into fleets around the world for short-haul passenger flights. That is where my journey begins.

Going back to California for the weekend to spend time with my family, I scoured high and low for a good price. Without a good price to be found, I went to my backup plan: find the route with the most miles involved. That all changed after I found a route on Google Flights that went through Houston, and included the magic words for me: “Boeing 787.” Miles went out the window – this was my chance to ride on a brand new airplane.

So after getting to the airport on time, using the priority lane to get through security (thanks to my silver status) and riding two hours on the bulkhead seat of a regional jet (in this case, it was worth it), I finally got to meet my new favorite plane of all time in Houston. My first impression was that it looked a lot smaller than it should be when compared to the Boeing 747, Boeing 777 and Airbus A380. But just like the TARDIS, it’s much bigger on the inside.

Boarding the airplane itself was a breeze! Thanks to the wide body construction, it now offers two aisles which makes for a relatively quick boarding process. As I was boarding, the first thing I noticed was the change in lighting. Instead of the rather obnoxiously bright standard lights, the cabin was lit in a very cool, soothing blue light. One would think that it would make it harder to see in the cabin, but instead it made for a much more relaxing experience. As advertised, the windows have no shades – instead, an electronic control that tints the window. I preferred this over the standard shade, as I have better control over the lighting and don’t have to play with the shade to get the right amount of light in.

Each seat comes with their own onboard entertainment system – pre-loaded with a selection of games, TV shows  and movies. Each also came with their own USB port, which should allow you to plug your own device in to interact with the screen (although I didn’t try it out myself).

But perhaps the two most striking features of this airplane came in the way it rode and the way I felt flying somewhere over New Mexico and Arizona. The Dreamliner’s features provide a much smoother ride – from the fins on the engines that reduce vibrations to technology that can predict and sense turbulence and route around it. The smooth ride, combined with the lower pressurization of the plane (the cabin is pressurized to 6,000 feet as opposed to the standard 8,000) made for a very comfortable ride. Even from my lowly seat in “economy” class, it felt like a luxury experience.

All in all, the Dreamliner seems to be the first airplane designed for not only efficiency, but foremost for the passenger comfort as well. I was thoroughly impressed with every feature from start to finish. Maybe next time, I’ll get to sit in the front of the plane…that is, if all my points add up correctly.

Have you rode on a Dreamliner yet? What was your experience? I’d love to hear about it – leave me a comment with your thoughts about the newest plane to fly the skies!

Hi Joe! Yet to fly on a dream-liner, but your experience here is inspiring me to book myself fast into one and enjoy the entire experience first hand myself!