The Virtues of Packing Light 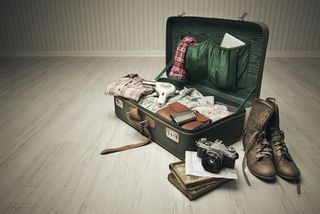 I used to be a heavy packer.  I had a suitcase so large that my co-workers affectionately dubbed it the “Green Monster”.  I dragged it through the pockmarked streets and sidewalks of Brooklyn, eventually coming to the realization that it wasn’t a suitcase at all.  It was an all-terrain vehicle for my clothes.

If you pack anything like I used to, you know it can be a bit of an operation.  For me, it usually involved a long checklist of items, a staging area where I could spread out those items and survey them, a reluctant volunteer to recheck my list, and the unenviable task of getting the items from the staging area into my suitcase: a process that typically involved a lot of cramming and smashing and, um, applied geometry.  (Pro tip: you can alter that third thing with enough of the first two.)

One day, as I was struggling to pull my suitcase off the luggage belt, somebody asked me, “Why do you pack so much?”

I didn’t have a good answer.  I need these things. Nope, not really.  I want to be prepared.  Prepared for what – a blizzard followed by a dust storm?  I have the space, so why not?  By that rationale, I should fill my trunk up with stuff every time I go for a drive. Plus, what would happen if my bags were lost or delayed? Everything I spent all that time applying geometry on would be gone, possibly never to be found again.

I decided I would start packing lighter.  Immediately, I noticed the surface-level benefits like having less luggage to tote around, being able to carry-on and avoid baggage fees, and the absence of dirty looks from people that wanted to get on the elevator with me and my luggage.

But there are some peripheral benefits I noticed over time: the “virtues” of packing light.

There’s an oft-referenced idea in writing that concision requires time.  It applies to packing as well.  I thought packing less would go quickly.  You know, cause less stuff.  But in the end I spent just as much time.  I just spent it differently…more prudently.

Instead of gutting my closet of shirts, pants, and shoes – trying to prepare for any social scenario, or inclement scenario, or socially-inclement scenario – I checked the weather forecast and researched the restaurants and landmarks and nightlife. From there, I asked myself what I would be doing each day and night and packed accordingly.

True, I didn’t know exactly what I would be doing.  There has to be some room for spontaneity when it comes to travel.  But that doesn’t mean I need four different shirts for every scenario.  Just pack what is most versatile and go with it.

This is more of a permeating virtue than the other two.  We live in a culture of excess, and while that’s a nice problem to have, it requires discipline to uproot yourself from it and say you’re going to do it differently.

Having decided you’re going to bring very little, you have to resist sinking back into that mindset.  You have to resist the urge to throw it all out the window because this trip is too important, or you just want to enjoy yourself without worrying about a lack of things, or whatever else that tiny, rationalizing voice can throw at you from the back of your mind. Also remember that baggage loss is always a threat when traveling by land, air, and sea. Is it easier to replace your entire wardrobe, or just select items from it?

And you never know, one of them could see how little you packed and pay forward some other kindness.  Before you know it, everyone is being nice to each other, and there’s peace in the world, and random strangers are giving you hugs on the streets, and why?  I’ll tell you why.  Because you left those argyle socks at home. Nice job.

Are you a heavy packer or light packer?  Tell us about it in the comments below.

What a useful blog and great shared to Packing service, thanks author I got lots of helpful info here.