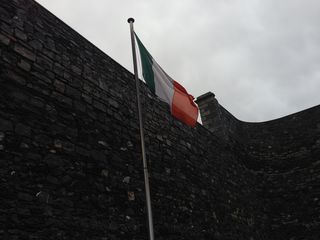 It’s disappointing, really. #EuroTour14 has officially come to an end, with my return to the United States on Tuesday. And already, I miss the wonders and people of Europe. From watching the Changing of the Guard in Buckingham, to singing bad karaoke with my new friend Tony in a pub in Dublin, this trip to Europe was exactly what I needed to get myself re-centered, and re-focused on why travel means so much to me in this world. I can’t wait to go back to Europe again – if nothing else, at least once more in September to Munich.

Dublin, as I’ve explained to so many I’ve come back to since, fascinates me as a city – as Ireland fascinates me as a country. For an island nation so proud of their place in history, they also view themselves as a very young country. In truth, Ireland is much younger than many of their European counterparts – only having claimed their independence from the Crown in the gap between the two world wars.

None the less, my trip to Ireland was nothing short of lovely. Between the history lessons learned at the Kilmainham Gaol and the National Museum of Modern Art (formerly the Military Hospital), to the liveliness and night life of Temple Bar, my trip across the pond will be one that I will long remember. I certainly hope that, as a result of all this travel, I’ll get to head back to the Emerald Isle sooner rather than later.

But as with anywhere I go, I learned valuable lessons from this trip that I plan on taking with me as I move further down the road. And unlike other trips, I picked up a unique set of tips that I don’t think I would have learned anywhere else. Here’s what I learned while I traveled to and far across the green hills of Dublin:

1: Know the road that leads home
Something that struck me about Dublin was, unlike London, the city was not as friendly to pedestrians as many parts of Europe are. This caused me to hop a lot more buses than I intended to while I was in the city. And in some cases, it caused me to get lost in places that were well off the beaten path. My first travel tip seems like it should come out of Travelers’ 101, but it’s a good reminder: always know which bus takes you to your destination, and which takes you home. Just because a bus has a number on it, doesn’t mean it’s the one going in your direction. If you’re unsure, pop into a shop that has WiFi, and do a Google search on where you’re going, and the bus number and line that should take you there. Another great travel tip: if you’re unsure, ask your bus driver, or use the free WiFi provided on the Dub lin Bus!

2: Pay in the local currency
I found it particularly entertaining that everywhere I went in Dublin, I had the opportunity to pay in either American Dollars or Euros. What they didn’t tell me was that the bank was trading 1 Euro for $1.30, while the shops were usually trading 1 Euro for $1.40. While a dime doesn’t sound like much, that’s $10 off of every $100 I spent. One of the most important travel tips that I’ve talked about before is to always pay in the local currency. This way, you know you’re getting (within reason) the same rate you would get at the bank – and save yourself some money as well!

3: Pre-Clearance is your friend
My final tip for visiting the Emerald Isle is to take advantage of the Customs Pre-Clearance at Ireland’s airports in Dublin and Cork. The nice thing about flying through these airports is that you’ll ultimately clear Customs before you arrive home, thanks to the great facilities at their airports. This saves you some time, prevents you from going back through TSA once you land, and gives you more freedom in what you bring back from the Duty-Free store! Enjoy being able to pre-clear and be on your way back home!

I can’t wait to go back to Ireland, and have a much better time armed with these great travel tips! Where do you have planned to visit this year? What tips do you have for those going abroad in 2014? Let me know your ideas in the comments below!