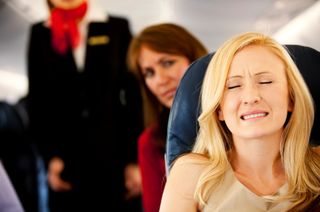 Does getting on an airplane make you nervous? If so, you’re not alone. According to Budget Travel, more than 25 million Americans suffer from flight anxiety, making aerophobia (fear of flying) the second largest fear in the U.S. after public speaking.

You might be thinking your fear is warranted after nearly 1000 people died from plane accidents in 2014. But if your fear is so bad you’re thinking about skipping your next vacation, hold that thought. Here are five tips to help you combat flight anxiety and get you to that well-needed trip.

Since the mysterious disappearance of Malaysia Airlines MH370 and most recently the devastating crash of AirAsia Flight QZ8501 with 162 people on board, the thought of stepping onto a plane might make you cringe. Despite what you hear in the news reports, flying is actually one of the safest ways to travel with less than one accident occurring for every 1 million flights. You’re more likely to get into a car accident on the way to the airport than wind up in a plane crash.

Don’t conceal your fear. Many times if you share your apprehension with the gate agent when you check in and the flight attendant when you board, you’ll receive assurance and support. Often times, flight attendants will go out of their way to check in with fearful flyers several times during the duration of the flight, so don’t feel embarrassed to admit that you’re nervous about flying.

3) Avoid a hyper state of mind

Many nervous flyers drink caffeine or alcohol products while flying. This is a costly mistake that is important for travelers to understand and avoid. By pumping your blood stream with coffee for example, the caffeine actually intensifies your anxiety and can make you dehydrated. When you travel, make sure to drink planet of water and non-caffeinated liquids.

For many flyers, encountering turbulence is the most challenging and terrifying aspect of any flight. Pilots are thoroughly trained on air turbulence and typically receive general warnings from air traffic control or other pilots in the area flying near the same altitude. When air turbulence occurs, picture yourself in a car driving over a pothole instead of thinking about being in the air. It’s also important to keep your seatbelt fastened and allow your body to flow with the air movement instead of tensing up.

5) Choose the front of the cabin

At check-in or when selecting your seat at time of purchase, nervous flyers should ask for a seat at the very front of the cabin when at all possible. If air turbulence occurs during the flight, the effects are often less noticeable in the front of the aircraft than in the rear. If you have an extreme dread of flying, don’t try to overcome your fears on a long flight. Take the shortest flight you can and preferably in the biggest plane possible.

It’s important to keep these few tips in mind before you step into the airport. Visualizing your destination and imaging yourself there can be a powerful antidote to stress-and can help keep you focused. Close your eyes, relax, and focus on the positive aspects of your journey.