Everything You Need to Know About New York – USI Affinity

New York: Your Ultimate Guide to Visiting the Big Apple 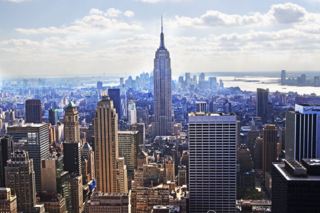 Legendary actress Myrna Loy once said, "If you’re bored in New York, it’s your own fault." We couldn’t agree with Myrna more. With so much to see and do in New York, there's little chance of boredom; in fact, it's impossible to experience everything New York has to offer in one visit. There are more than enough reasons to visit the Big Apple, but what are the top things to see, do, and know about New York?

You’re about to find out. Let’s first start out by mapping the top 5 “boroughs” and neighborhoods in New York.

The Bronx is where hip-hop was born, where the Yankees became a dynasty and where you can find New York City's leading zoo and botanical garden. The real Little Italy is located in the Bronx on Arthur Avenue. This strip is filled with top-rated restaurants offering authentic Italian cuisine. Other notable Bronx attractions include art deco architecture with over 400 buildings, the largest urban zoological park in the U.S., City Island, which consists of a seaside community and has the look and feel of a small New England fishing village, and so much more. Ilovethebronx.com is a great site for a further look into this popular NY borough.

No matter how hip it looks on TV, NYC's most populous borough is best experienced in person. Highlights include live music, Prospect Park, Nets basketball, Coney Island, and Sunset Park to name a few. With fall right around the corner, Prospect Park is a well sought-after destination to admire fall foliage. For the true Coney Island experience, head to Luna Park. The seaside resort overlooking the Atlantic Ocean has been New York City’s playground since the 1880s. Its iconic wooden boardwalk, built in 1923, affords some of the best people-watching in Brooklyn and is home to the original Nathan’s Famous, (which began as a nickel hot dog stand in 1916).

Classic Manhattan – to sum up this borough, it’s world-class museums, fine dining, unforgettable views, the Flatiron District, Governors Island, Grand Central Terminal, Lord & Taylor, and of course the famous Madame Tussauds. When one visits Manhattan, a visit to Katz’s Delicatessen is a must. It’s a true step back in time. You grab a ticket at the door, wait in the scrum of lines to place your order with the gruff countermen—and their advice: “please don’t try to eat the whole pastrami sandwich in one sitting.” Manhattan is also the most densely populated of New York City’s 5 boroughs. It’s truly the heart of “the Big Apple” and iconic sites include skyscrapers such as the Empire State Building, neon-lit Times Square and the theaters of Broadway.

Famous for food from around the globe, Mets baseball, U.S. Open tennis, and one of the world’s most diverse cities, in Queens you really can experience it all. The famous song What a Wonderful World, sang by the one only Louis Armstrong was indeed conceptualized in Queens where Louis lived with his wife for more than 40 years. After both of them passed away, his home became a museum and a top attraction in the city for tourists. Nine miles east of Times Square you will find Forest Hills, Queens. It was here in 1954, among the red-brick Tudors and tulip trees, that local boys Paul Simon and Art Garfunkel began writing music together and became pop royalty. Not only is Forest Hills rich in history but it’s also home to Classic eats, vintage fashions and sports history.

With coastline attractions, picturesque parks and kid-friendly activities, Staten Island remains an unspoiled paradise right in New York City. A classic visit to the southernmost borough usually involves a ride on the Staten Island Ferry, followed by a quick stroll through the St. George Ferry Terminal and a returning boat ride to Manhattan. There are plenty of reasons to stay in Staten Island for the entire day though! Not only is it the greenest borough, with around 9,300 acres of parkland, but it's also one of the most historically rich, with ties to Italian explorer Giovanni da Verrazzano, the Revolutionary War and the abolitionist movement.

There are exciting things on the docket for Staten Island, too, including a major new attraction in the form of the New York Wheel, a soaring 360-foot Ferris wheel set to open in St. George in 2016. With its surplus of charming neighborhoods, cultural institutions, authentic restaurants and natural reserves, Staten Island provides a scenic daylong retreat from the hustle and bustle of Manhattan.

As you can see the number of attractions, places to eat, and things to do in New York are countless. Some other top activities and attractions that are home to the “Big Apple” are:

Simply put, New York is filled with opportunities that are waiting for you to explore solo, with your partner, or your family. As the famous Alicia Keys sings: Concrete jungle where dreams are made of, there’s nothing you can't do, now you're in New York, These streets will make you feel brand new, big lights will inspire you, Hear it from New York, New York, New York!