The 10 Best Halloween Celebrations in the US 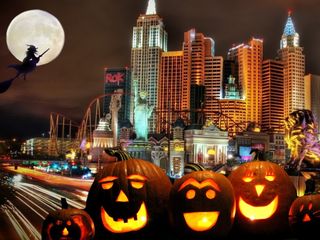 Halloween’s emergence as a cultural mainstay is a testament to the fun, freewheeling spirit of the holiday. Across the country, cities celebrate the ghost season with festivals where you’ll find remarkable costumes, haunted tours, and spooky rituals.

In spirit of the spookiest time of the year, we have gathered the 10 best Halloween celebrations in the U.S.!

Talk about a celebration-over 500,000 people fill Santa Monica Boulevard each year on October 31st for the world’s largest Halloween street party. The neighborhood bursts with creative one-of-a-kind costumes, six stages with over 50 music acts provide ambiances as attendees march along the boulevard,

trendy bars and clubs offer a variety of contests, drink and food specials, and most important, the evening leads up to the popular “Queen of the Carnaval.” The Queen of the Carnaval is crowned every year and previous Queens include Rihanna, Queen Latifah, and Lisa Vanderpump. Admission is free to this world-famous event too!

Known as the most haunted city in America, New Orleans goes all out for its Halloween celebrations and is laden with guided haunted tours that bring only the bravest of souls. The main event is centralized in the Faubourg Marigny neighborhood, within walking distance from the French Quarter’s more risqué holiday showcase. New Orleans’ has an open container law that heighten’s the party atmosphere, as booze flows freely from the many stations and stalls. The opportunity to be alongside the outlandishly-fashioned partygoers makes for a most memorable Halloween.

Party + parade, this massive Halloween event shuts down over a mile of 6th Avenue in Lower Manhattan. With over 2 million annual visitors, 50,000 of which are in costume, the Greenwich Village Halloween Parade is the largest Halloween celebration in the world. Hundreds of bands, dancers, circus performers and floats cut a path through Greenwich Village for what is America’s only nighttimeHalloween parade.

Most of us relate Universal Studios in Orlando as family-friendly, but you might want to leave the kids behind for this one as this celebration is not for the faint of heart. The haunted houses and costumed characters are legitimately frightening. This year, attractions include zombies from The Walking Dead, an Alice Cooper-themed haunted house and scenes and characters from Silent Hill. Running now through November 1st, this Halloween event puts you right into some of the most pulse-pounding moments you will ever come across.

All aboard … if you dare! Often said to be the most haunted place in the world, the cruiseliner QueenMary, docked off Long Beach, CA, is one of the scariest and most festive places to celebrate Halloween.The experience at Dark Harbor is quite unpredictable. Visitors venture through 6 mazes haunted bymore than 200 monsters and ghosts, many of which are inspired by the actual spirits that haunt theship. The experience runs throughout the month of October, and includes live entertainment, food and beverages.

Brace yourself for some serious farm-raised horror. Every year, Knott’s Berry Farm theme park in BuenaPark, CA, transforms itself into “160 acres of horror.” The slogan here is “Walk in, Freak Out,” and that’sno joke. With more than 1,000 monsters, 13 mazes and 4 scare zones you may need to bring your Hallscough drops-your voice is bound to need it from all the screaming. This year promises to up the scareeven more with Trapped, an all-new, interactive maze that allows 6 visitors through at a time, with onecatch-there’s no escape.

Are you surprised the Strip made an appearance on our top 10? Las Vegas has never managed to do anything small, and its Halloween festivities are not different. Along the Strip, the hotel complexes vie for top thrills as thousands come to the city for Halloween weekend. Despite the world-class list of nightclubs, restaurants, and bars, the best way to enjoy a Vegas Halloween is free, as a stroll down the Strip brings you face-to-face with the world’s most inventive and elaborate costumes. For a Las Vegas fright experience, head to Circus Circus, where the Adventure dome theme park transforms into Fright Dome, with six haunted houses, including Insanitarium, a shuttered insane asylum where the surgeon of slaughter will pursue you to terrifying ends.

8) Festival Of The Dead

Historic Salem, Massachusetts is ingrained in the minds of anyone who’s ever touched an American history textbook. 500,000 visitors each October take over the town for the Annual Psychic Fair and Witchcraft Expo which runs daily each October and is the most opportune way to interact with psychics,mediums, crystal balls, and more. The festivities all culminate in the heralded Salem Witches’ Halloween Ball at Hawthorne Hotel, where hundreds gather to “summon the spirits” of Halloween.

Just outside of Colorado Springs, Manitou Springs is a small town of 5,200 people and home to naturalmineral springs. Those springs, once believed to have healing powers, attracted pianist Emma Crawfordin 1889 in an attempt to cure her tuberculosis. Dying two years later in 1891, Crawford insisted on beingburied at the summit of Red Mountain. Since 1995, the town has memorialized Emma Crawford with theannual Emma Crawford Festival the weekend prior to Halloween. The zany affair hosts coffin races,where impersonators of Crawford ride in wheeled caskets while being pushed by four “mourners.” Ifyou’re looking for new ways to exercise this fall, casket pushing might be your new favorite workout.

Chicago’s Northalsted neighborhood is celebrating its 19th year of Halloween on Halsted festivities. All are welcome to participate in the annual parade that floods the streets, though you must register to walk. A costume competition divides participants into five categories: pet costume, drag, scariest, most original, and best group. Fire twirlers, stilt walkers, marching bands, and Dorothy from The Wizard of Oz are staples of the homegrown parade. The .7-mile stretch of city blocks covers a predominantly LGBT-friendly area of restaurants, bars, and clubs that all pick up when the parade ends with door-busting specials.

Posted at 11:03 AM in Vacation Destinations | Permalink | Comments (0)