Paris: My Trip of a Lifetime – USI Affinity

This week, our own Kathie Clark shares her experience traveling to the City of Light.

I have been obsessed with Paris from the moment I knew it existed. 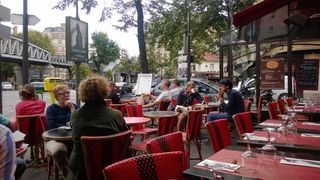 I felt a connection to it that I could not explain. I was just drawn to it and knew that someday, somehow, I needed to visit there. So, when my soon-to-be husband asked where I wanted to go on our honeymoon, the words flew out of my mouth before he even got the entire sentence out. My wish came true almost three years ago and I have been plotting our return ever since.

The first surprise in the planning process came when we learned that Best Western is an entirely different animal in France than in the U.S. It appears they have purchased boutique hotels and put their brand name on them. We chose the Hotel Cambronne Best Western merely because it was near the Eiffel Tower. Who knew how absolutely brilliant this decision would be. Talk about dumb luck!

A word to the wise, there are multiple businesses in Paris with the same name that aren’t related to one another. Our shuttle driver took us from the Charles de Gaulle airport (pronounced “Charles de Ghoul” or as by its acronym of CDG as “say-day-zhay"), as requested, to the Hotel Cambronne. Imagine our horror when the front desk told us they have no reservations for us. After several minutes, they explained that there is a different hotel of the same name and we must be booked there. They called the other hotel for us and that was indeed the case. WHEW!

Paris is organized in districts, or arrondisements. Cambronne is in the 15th arrondisement. Our mission was to see all of the famous sites, but to also live as locals as best we could. Cambronne was utterly perfect for this. Not only was our hotel a block from the Metro, but we could also walk almost all of the city by foot.

The center of Cambronne is a traffic circle. It appears that these monstrosities are everywhere in Paris. It takes a while to figure out the traffic patterns to ensure you don’t get run over! The neat thing about the circle was that there was an eatery on every corner. What we loved about this area was none of those were formal restaurants. They were brasseries. The best way to describe that is a more casual (yet very nice) restaurant and bar. It seems that all brasseries have wonderful patios. If it rains, no probleme, they simply press a button, and out comes an awning. If necessary, they kick the heaters on. Sitting on the patio is supremely French and was our favorite thing to do.

We found a brasserie we loved dearly at the end of our street (and on the circle) called Le Royal Cambronne. We visited there, at minimum, twice a day. We usually started out with a late lunch of croque monsieur before we headed into the city and had a late night snack and drink at night.  We got to know Herve and Charles, part of the amazing staff there. Our favorite and most memorable stories came from them teasing us (usually about my French). 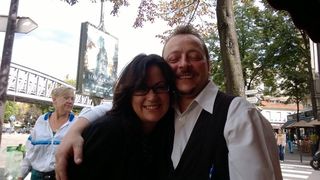 One of those stories came from the first time I ordered. Herve informed me that I could order in English, but I very much wanted to do it en Francais. He humored me. I immediately went into, “Je voudrais…” Herve immediately stopped me. “Non. Je voudrais…I would like (as he made a wishy washy hand gesture). Je veux…I want!” It was one of those insights into French culture that we could have never gotten if we had stayed in the heart of the city. While many think the French are rude (by the way, nothing could be further from the truth, in my experience) – I believe it’s this very subtle language difference that explains it all. They are assertive and efficient in how they express themselves. I found that exceptionally charming and as someone who never feels like I express things softly enough here in the States, I felt at home.

When deciding where to stay on your visit to Paris, I highly recommend choosing a neighborhood over being right in the city. You will have the wonderful benefit of being able to walk nearly everywhere (helpful for walking off those amazing meals!), but most valuably, you’ll be a part of a community during your stay. Seeing the Musee d’Orsay, the Louvre and all of the other famous sites was fabulous. The sense of perspective you gain when you see a sign at Notre Dame celebrating its 850th anniversary cannot even be expressed in words. In my opinion, if you really want to know Paris though, mix these historic sightseeing trips in with living like a local for your stay. If you happen to pick Cambronne, be sure to say, “bonjour” to Herve for us.

In the next blog on Paris, we’ll talk all about food: where to go, what to order and why you need to know how to ask for the bill! Until then, au revoir!

your blog is amazing I'm following your blog :) nice information and guides thank you.

Thanks for sharing your experience about Paris in such a nice way. It will help people a lot who are planning to go to Paris like you but have a very little idea about it. But one point I missed in your post and that is about the transportation system of Paris. Please let us know something about it according to your experience.