Why they did it: International students tell us why they chose to study in the United States! 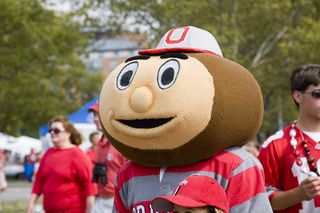 Did you know there has been an exponential increase in the number of international students studying in the United States over the past decade? With the majority of these students coming from various Asian countries, it has really turned our American universities into a diverse, colorful, melting pot. So why do these students choose to study in the United States? We can read statistical information all we want, but what really makes them tick and what have been some of their best experiences here in college? I reached out to a number of international students/alumni I met as a college student at The Ohio State University, and this is what they had to say!

“It feels fresh and new as a foreigner”

Kevin from Taichung, Taiwan came to the United States in 2011 to start his career at The Ohio St 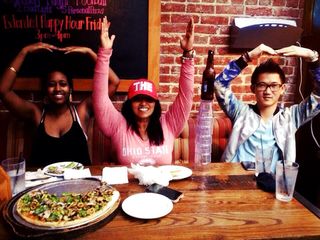 ate University. The first thing he cited as he stepped into the Chicago airport was that for once, he was the foreigner. “It felt so fresh and new as a foreigner.” He still recalls his favorite memory was his first Mirror Lake Jump. For all of those not familiar with this tradition, the Mirror Lake Jump happens every year, where Ohio State students jump into a lake on south campus as a way of rooting for Ohio State before the Michigan vs. OSU football game. Kevin thought this tradition was absolutely unusual and crazy, but he loved the energy around it. It gave him the opportunity to experience something different that he otherwise would not have in Taiwan. “I’ve done some very different things here in United States, so I’m glad I came.”

“You can see so many different faces” 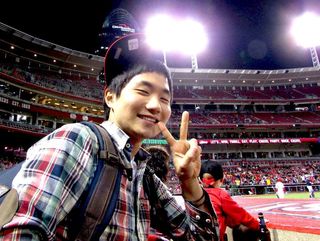 “I had always loved learning about different cultures and have wanted to meet people from all over the world, but never got the chance to do it in Korea,” says Sangin of Changwon, South Korea. Although South Korea is gaining a bit more diversity from other countries, it is still mostly an ethnically homogeneous country, with 96% of its inhabitants being ethnic Koreans. When Sangin first came to the United States, he was immediately ecstatic that everywhere he looked, everyone looked so drastically different from one another. He recalls his first class at Ohio State, which was a general education course in Comparative Studies. Of the 30-something students in that class, at least 6 different countries were mentioned while the students introduced themselves. “I knew I would finally be able to learn about different cultures and make new friends here.”

Marie, from Guangzhou, China initially came to The Ohio State University solely to pursue a logistics degree at the business school. “I didn’t really want to leave home, but [the business school] has #4 logistics program in the United States,” she says. When she first got to campus, she tried to stick with other Chinese students and hold on to her culture and a sense of home, as many international students do at first. She wasn’t too keen on meeting new people or getting to know anyone else initially, but things changed when she met Caitlin. Caitlin, a business student from Solon, Ohio was very much interested in East Asian culture and was learning Mandarin Chinese at the time. Marie was astonished that an outsider could be so accepting of and interested in Chinese culture. “If she knew so much about my culture, then I could also learn about her culture,” Marie reflects. To date, Marie feels studying in the U.S. has made her a much more open-minded, accepting person. “I have made friends from other countries, and have stepped out of my comfort zone.”

* Name has been changed

“You can earn your place fairly”

In India, much of the educational system and even workforce is based on the Hindu caste system, which serves as a form of affirmative action. This was not something that Ananth agreed with. Belonging to the Brahmin caste, the highest caste in Hinduism, his chances of getting into a good university were extremely slim, as compared to someone from a lower caste. “I don’t think that’s fair,” he says. “If I am denied acceptance into a good college, it should be for my test scores – not my caste.” As a result of this, he chose to come to the United Stated to study. The caste divide would be eliminated, and he would finally be judged solely on his caliber and qualifications. He now works at a local insurance company, where he was selected for the position due to his extensive internship experience and fit with the company. “My caste was not once mentioned, and that felt good.”

“You can discover your own talent”

Jinsaem, of Seoul, South Korea reflects how coming to the United States to study really allowed her to foster her own skills and discover her passions. In many Asian countries, the educational system is very competitive and demanding. South Korea is no different. She explains that after her regular high school classes ended, she would have to go to a mandatory intensive after-school program that would usually end around 11pm. Many students would also be signed up for private tutoring classes after that. Jinsaem reflects that she had felt extremely drained by the time she started applying for colleges. But when she decided to consider studying in the U.S., things looked up. “I heard from my friends that American universities were very free and many classes, you can choose your own topics and do different things.” She feels that by coming to study in the United States, she has had the downtime at her disposal to discover her passions and take classes that she otherwise would never have encountered back home. “I actually took an art class in college last semester, and it was very fun! Never thought I’d be taking an art class as a business student.”

International students consistently choose American universities for their college education for a plethora of reasons. Regardless of which university they choose though, there are a few barriers they all need to get through – legal processes to get here, and then once they are admitted into their university of choice, finding the right health insurance program that works for them. By checking out the StudyUSA plans, international students can find a plan that best suits their needs. We wish all international students currently studying in the U.S. and those planning to study here soon the best of luck!