Safe Travels after the Brussels Bombings? Here’s What to Do. 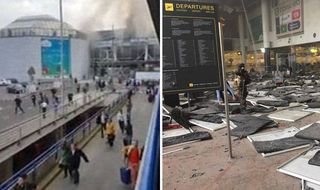 In case you haven’t been keeping up with the news lately, this past Tuesday morning was an absolutely dreadful day for the citizens of Brussels, Belgium, and is considered the deadliest act of terrorism in Belgium’s history. On the morning of March 22nd, three synchronized nail bombings took place in three different parts of Brussels: two at Brussels Airport, and one at the Maelbeek Metro Station. Thirty-one victims were proclaimed dead, and another 270 people were injured. As if the Paris Attacks from last November didn’t cause enough apprehension throughout the world, the Brussels Bombings have really reaffirmed people’s fears of traveling, reversing the progress that was beginning to occur. But that progress doesn’t have to stop. As difficult as it is to believe traveling abroad is still okay and possible right now, we can still do it. We can still stay safe and enjoy our vacations in peace. We just need to be careful. So here are some tips and alternatives, as well as some of the things you should be made aware of, so you can still enjoy your travels – safely!

With the Paris Attacks and now the Brussels Bombings, it’s not at all wrong or unusual for any of you to be feeling uneasy about booking vacations in Western Europe, and we aren’t here to convince you to go if you’re absolutely against it. But, that doesn’t mean you need to completely brush off all potential vacation ideas for the next few years. Instead, think of alternative options. According to CBS News, Brazil is a trending vacation spot right now, especially with the 2016 Summer Olympics approaching. If not that, check out countries in Asia, or even Australia. Europe doesn’t have to be your only option!

If you see unattended baggage, report it immediately

Have you ever heard that voice recording that plays in literally every single airport, urging you to report unattended baggage immediately or else it will be confiscated? This is critical because lots of terrorists leave bombs and weapons in baggage and then walk away. But, we’re all busy travelers – none of us have time to observe suspicious luggage and report it. We’ve got a plane to catch, right?

If all of us took a little bit of extra time to really pay attention to any unattended baggage lying around and reported it, we might just be the difference between assuring everyone reaches their destinations safely, and witnessing a terrorist attack take place.

Be on your guard in large, crowded areas

If we take a look at both the Paris Attacks and the Brussels Bombings, there’s one common denominator we can see here: The terrorists chose large, crowded, busy places to carry out their attacks. Why? Because people in these places are usually busy and on the move, and are less likely to pay attention to suspicious behaviors in their surroundings. Don’t let that happen. Wherever you are, always make sure you are observing your surroundings very closely and report any suspicious behavior. According to the U.S. Department of State, this is especially true of European countries where terrorists target large sporting events, theaters, open markets, public venues, etc. So if a trip to Europe is still on your radar, this is something you especially want to pay close attention to!

It may seem like terrorism is on the rise right now, but remember it is still safe to travel – some places are just riskier to visit than others. If you check out the State Department’s page on issued travel warnings and alerts, you can get an idea of which countries are risky to travel to. If you’re still planning to travel to any of these countries, please make sure to get travel insurance. In the event that you booked a vacation to a high risk country and an act of terrorism just happened and now you no longer want to go there, you’d get reimbursed for that trip. If you end up taking that trip anyway and get caught in a bad situation where you get injured, travel insurance will help you receive the medical attention you need. Travel insurance is always a must – especially if you are traveling to high risk countries, or places that have been stricken with terrorism.

We hope you follow these tips to become wiser travelers. Traveling safely isn’t as easy as it was back in the day, but if we all work together, become more cautious, careful, and observant, we can hopefully put a curb to terrorist activity, and travel with peace of mind!