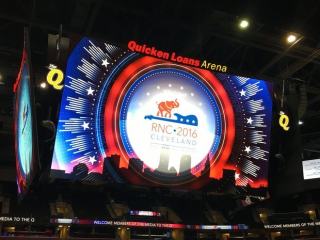 As a result of recent violence that has occurred this year, security has spiked around large events, including the Republican National Convention that is about to take place in Cleveland next week. As we’ve seen with the attacks in Paris, Brussels, and Orlando, large, crowded areas seem to be a breeding ground for terrorist activity. Given this trend, the security will be increased for the Republican National Convention, including various safety measures to ensure people stay safe. Here’s what you can expect:

From surrounding highways that stretch for miles, to streets just encasing the Quicken Loans Arena where the convention is being held, driving around in any of these areas is going to be a real hassle. Officials will close roads surrounding Quicken Loans Arena, most likely to ensure the safety of the thousands of pedestrians that will be strolling around in the area. Also, there will be limitations for using the I-90 highway, as it will be extremely crowded and traffic will need to be regulated. So if you’re planning to take a trip to the East Coast, find another route.

Were you thinking of simply taking a nice, short flight from your hometown to Cleveland? Well, it may not be as short and comfortable of a ride as you expected, unfortunately. Flight restrictions will be established for flights to Cleveland during the time of the convention, and Cleveland-bound flights need to first stop at the Youngstown or Akron-Canton airports for preliminary screenings before being permitted into Cleveland. Even though Cleveland is generally much more laid back when it comes to traveling there, during huge events like the Republican National Convention, you had better bet airport security officials will be watching you like a hawk.

Cleveland city officials spent some time developing an event zone to help regulate where attendees of the convention can congregate. There is also a limited, restricted area where individuals can assemble and protest. These safety measures will help establish safe zones that police can enforce to make sure anarchy is kept at bay. If crime does occur, these specified areas will allow police to more efficiently track it down.

Ban on any Potentially Hazardous Objects

Everything from knives to even something as seemingly harmless as umbrellas and sleeping bags will be banned at the event. It’s quite obvious why officials would ban knives and other sharp objects, but why are sleeping bags and umbrellas being banned? It is cited that some umbrellas may have pointed ends, which could potentially be used to harm someone. As for sleeping bags and ice coolers, people have gotten very unique with their weapons, so you never know what could be potentially dangerous to the general public. However, as ironic as this is, guns will be permitted at the RNC. So please be very careful, everyone!

We hope you all have an awesome time at the Republican National Convention. Safety is absolutely key when you’re in large, crowded areas with lots of chances for people to let their emotions and rage get to them. And the RNC is exactly that. So stay safe, and have fun!