USI On The Move: Belfast City

Travel Insurance Services is more than a set of select travel insurance products. We take pride in having experienced world travelers working with us to guide our customers through choosing the perfect coverage options for them. For this part of the #USIontheMove blog series, we sat down with USI Affinity’s Arielle Eaton to hear about her experience traveling in Northern Ireland. 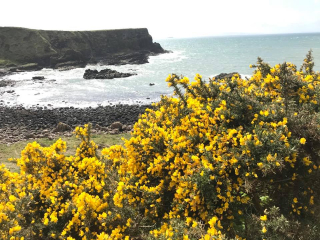 Like so many places around this incredible world, it is hard to describe in full the emerald, earthen beauty of Ireland. The movie scenes and travel photos I had mooned over for years, I found, could never do justice for the wild sea of green and the rolling waves of ancient hills and valleys. For me, as for many Americans, setting foot in this unfamiliar place is more than just a holiday--it’s an adventure in retracing family roots. Reconnecting with a place that once was home to your family nearly two centuries ago is an incredible lens through which I could see this country from a different perspective than most anywhere else I had traveled to before.

When I stepped out of the Belfast Airport, I was afire with excitement and curiosity in anticipation of the days ahead- a fire that was all but extinguished by the reality of a cold rain that seemed to fall relentlessly from the signature grey clouds hanging low across the horizon. And yet, despite this cold and wet welcome- the hearty warmth of the local people who smile their way through the dreariness is inspiring. This was how I began my trip to one of Northern Ireland’s largest cities- Belfast. It was not until I was riding across the countryside on one of the many shuttle services that take you directly from the airport to the heart of the city that the sky cleared and I fully understood why the rain didn’t seem to bother anyone around me. It turned the landscape into a gorgeous sea of green.

Travel Tip: Know before you go! It seems like common knowledge to check up on the weather forecast before you travel to a new place- but it also pays to research typical weather patterns for that time of year in your travel destination!

The city of Belfast became well known as a successful industrial hub and was an internationally recognized shipbuilding port- it was here that the infamous RMS Titanic and its two sister Olympic Class ocean liners  were crafted in the early 1900’s. Commemorating Belfast’s connection to the Titanic is the famous Titanic Belfast, an interactive visitor experience bringing to life the ocean liner’s journey from start to finish. Despite its continued success as a center of industry, Belfast was spotlighted for what locals refer to as the Troubles- a reference to a violent conflict among the unionist and nationalist parties that tore apart the city between 1968 and 1998. Today, it is incredible to see a city that has not only found harmony socially but has reshaped itself into a booming, exciting and vibrant destination for locals and visitors alike.

While there is so much to do in the city itself, do not pass up the numerous, affordable travel coaches and tour services that take you off to nearby attractions in Northern Ireland. Each of the attractions listed below can be visited easily through one of these guided tours or by going into the city itself.

Travel Tip: Don’t judge a book by its cover! This tip goes both ways--do your research before jetting off to a remote tropical island you saw an ad for or before nixing a new place entirely. It pays to read about other travelers’ experiences to really get the most out of a destination, save money and/or stay safe. 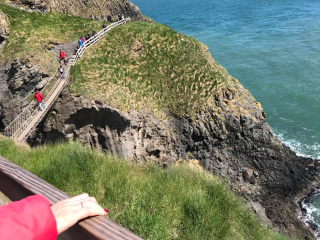 Crossing the Carrick-a-Rede Rope Bridge is more than just a ‘touristy’ experience, it is an interactive insight into Irish history complete with my favorite staple of every turn in my Ireland journey--a story. According to the National Trust site, Carrick-a-Rede Rope Bridge was originally erected in 1755 by salmon fishermen. This bridge crosses the Atlantic ocean at 100ft above sea level to the cliffs of Carrick-a-Rede Island, which is inhabited only by a single fisherman’s cottage.

Salmon was fished at Carrick-a-Rede starting as early as 1620. About 350 years ago, Irish fisherman put up the rope bridge in order “to reduce reliance on a boat to reach the island.” The salmon industry boomed until the 1960’s and in 2002, the last salmon at Carrick-a-Rede was caught. Though there are no longer any fisherman to be seen casting off their nets from the cliffs of the island, the history of the area remains with hundreds of tourists coming to cross the same route each year.  I am here to assure you that the bridge is now much more safe than what these traditional fisherman would have rigged up, and the experience (especially the view) is well worth it. 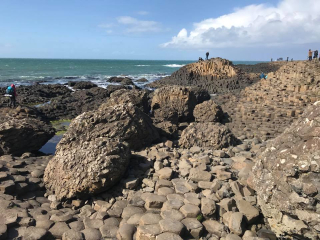 There is such a rugged beauty here, brought to life by the local story tellers and their tall tales of the giant, Fionn mac Cumhaill. It’s as if this place has only been touched by imagination and the sea.  Giant’s Causeway is a shore at constant war with the sea. It is a truly spectacular sight when you start the path down to the shore from the tall, rocky cliffs.

The Causeway is set at the bottom of the towering cliffs marking out a dramatic edge to Northern Ireland’s Antrim plateau. What makes this shore so incredible are the estimated 40,000 polygonal basalt columns that cover the area. This unique formation is the result of volcanic activity some 60 million years ago and has served as the basis for local legends quintessential to Irish heritage. It felt as though the sea had erected this staircase for some greater purpose as I hopped from column to column, which brought to life the story of the Irish giant Fionn mac Cumhaill- otherwise known as Finn McCool- who used those very columns to build a bridge across the water to Scotland. Learn more about Finn’s story here.

Travel Tip: Don’t forget to take a selfie! The ‘selfie’ may be a recent phenomenon with the rising popularity of the front facing smart phone camera, but snapping a photo of yourself in a location or having someone take a picture of you makes it a more personable memory to share with others. 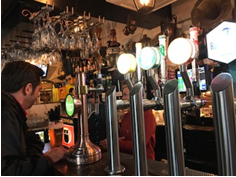 The Pubs Of Belfast

Nothing seems more quintessential to the Ireland experience for a tourist than trying out the local pub fare. As I learned very early on in my U.K.  journey, the pub is more than just a bar as we know them here in the U.S. A pub is a meeting place for members of the community to come together, talk, play a card game or two, and enjoy neighborly company. As my tour guide referred to pubs, they are sort of a “village living room.” Though there are numerous pubs nestled in the cracks and crannies of Belfast’s rising infrastructure, each one that I popped my head into while ducking out of the rain felt just like that--a living room, often complete with couches, televisions and people of all ages laughing heartily.

Kelly’s Cellars is one example of such an establishment, honored as one of the oldest traditional pubs in the city having been built in 1720. Of course it is great fun to have a pint in a place older than your home country’s formal establishment by over half of a century. But that aside, this pub brought to life that aforementioned sense of community for me. Another of my personal favorites was none other than Maddens Bar, a long-established Irish pub that fills with traditional music every night of the week.  I walked in looking for a quick stop out of the rain and ended up sticking around for hours enjoying friendly conversation with fellow pub patrons and listening to more of the city’s history.

Travel Tip: Take advantage of local tour groups! Many hotels or hostels offer deals on various tours and sightseeing experiences. If you aren’t sure which ones are worth while, don’t be afraid to check with a local staff member at your lodging!

The Troubles have left behind a visible mark on the city by way of Belfast’s famous murals. Just by walking through the city, any passerby takes a stroll into the dark history, hopeful future, and other iconic figures or scenes of Belfast through the numerous mural paintings.

Each one is unique in meaning and style. Collectively the pieces have become a key part of Belfast’s culture. If you’re interested in learning more about the murals during your stay in Belfast, you can check out one of the guided tours of the murals specifically.

Travel Tip: Exploring somewhere new is why we travel- but make sure safety is your main priority. When traveling alone, be sure to have someone to check in with, whether that is the front desk of your hotel/hostel when you come in and leave, or someone you can message on your phone letting them know where you are.

Everyone I met along the way during my stay in Belfast had a different perspective based on their experience. Belfast is a long standing industrial powerhouse, it is a battlefield of sorts rich with history, and it is a vibrant tourist destination beautifully blending traditional Irish charm with a modern flair. As the city continues to grow and thrive, I have no doubt that it will hold on to its history, its stories, and the warmth of its local people--all of which make it a truly special travel destination. Until next time, Travelers!

USI On the Move- Meet the Team: Arielle Eaton is a Marketing Project Manager for USI Affinity. Born into a military family, Arielle has been an avid traveler “since day one.” She is a 2014 graduate of Norwich University with a Bachelor of Science degree in Communications. In her spare time, Arielle enjoys exploring new places through trail running, baking and writing.