USI On The Move: Belfast City
The Anatomy of a Travel Plan: Trip Cancellation

As states continue to become compliant with the REAL ID Act, which sets universal, nation-wide standards for identification (i.e. driver’s licenses), there is still mounting confusion for companies and their corporate travelers over which enforcement deadlines to pay attention to.

To break it down, there are two deadline types you should know about, and the latter is the most relevant for travelers.

33 states and Washington, D.C. are already issuing licenses and identification cards that meet the new standards. The other 17 states and five U.S. territories have extensions which expire on October 10, 2018.

Starting that day, travelers in non-compliant states that do not have extensions will not be able to use their driver’s licenses at TSA checkpoints in U.S. airports.

Before you panic, remember that further extensions are likely to be issued. That said, if your state isn’t REAL ID ready, make sure you or your travelers have a passport or alternative identification on-hand to show at the airport.

See below for the current list of compliant vs. non-compliant states. 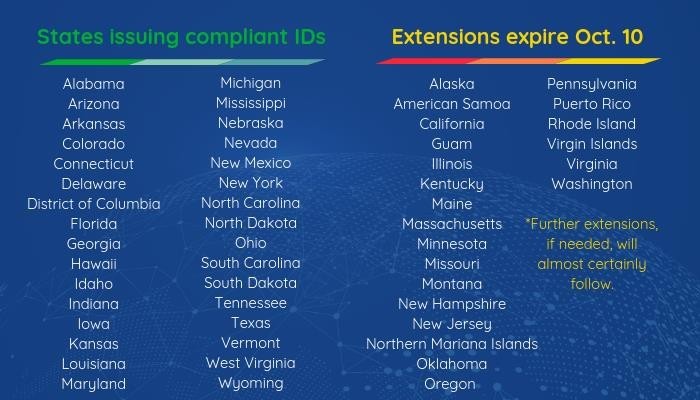