Travel Insurance: Financial Default and Bankruptcy of a Carrier
The early bird gets the vacation time: National Plan For Vacation Day 2019

How does the government shutdown impact your travel plans? 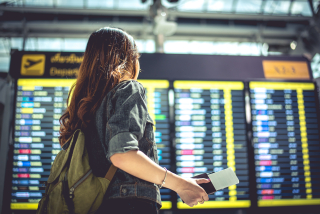 Today, January 22nd, marks the 32nd day of the longest government shutdown in the nation’s history.1 While not all factions of the government have been halted, this partial shutdown, which began in late December, has seen approximately 800,000 federal workers not receive pay.2 Unfortunately, these government workers aren’t the only ones impacted—travelers flying both domestically and internationally have reported longer security lines and delays.

Two key groups essential to maintaining airport security and efficiency are currently not receiving funding or pay through the current partial shutdown: Transportation Security Administration (TSA) and air traffic controllers. The functions they perform in relation to the safety and security of American airports and airways mean that many personnel are still required to work despite the lack of pay. So, how does this impact travelers?

In a press release published on January 15th, TSA reported an average national rate of 6.8% unscheduled absences in their workforce.3 This is a significant increase from one year ago when the average was just 2.5%. There have been reports of unusually long wait times and closed security lanes as TSA workers are spread thin to make up for personnel calling out of shifts while going unpaid. Various news stations across the country have reported delays in security wait times and security lane, or even airport terminal, closures as a result of TSA employee shortages. For example, USA Today reporter Dawn Gilbertson reported multiple apparent delays related to a lack of TSA personnel at various airports, including Atlanta’s Hartsfield-Jackson International Airport and the Houston Bush Intercontinental Airport.4

However, despite the increase in absences for TSA workers, the average wait times for the top major airports in the U.S. reported in the aforementioned January 15th press release were within the normal TSA times (30 minutes or less for standard lines and 10 minutes for TSA PreCheck).3

Planning a trip to one of the many national parks across the country? Due the partial shutdown, many of the national parks have been closed or partially closed.7 The National Park Service (NPS), the organization charged with maintaining the national parks, has released this statement on their website:

“During the federal government shutdown, this website will not be updated and may not reflect current conditions. Some national parks may remain accessible to visitors; however, access may change without notice. Some parks are closed completely. Some visitor services may be available when provided by concessioners or other entities. For most parks, there will be no National Park Service-provided visitor services, such as restrooms, trash collection, facilities, or road maintenance.”7

For more information on the individual parks during the shutdown, NPS advises visiting https://www.doi.gov/shutdown and the specific park websites.

Travel Tips during the Shutdown

If you do intend to travel during the partial government shutdown, Travel Insurance Services has a few tips to make your trip as smooth as possible:

How Can Travel Insurance Help During the Shutdown?

While travel insurance doesn’t generally include a government shutdown as a covered reason, your best bet is to have a plan with Cancel For Any Reason (CFAR) coverage. This means just what it says – you have the option to cancel your trip for virtually any reason you want and are generally covered up to 75% of your total insured trip cost.

Another note-worthy benefit is Trip Interruption For Any Reason (IFAR) – as with CFAR if your trip is interrupted due to the government shut down this coverage will reimburse your prepaid, unused, non-refundable Travel arrangements, generally up to 75% of your total insured trip cost.

If your flight is cancelled or delayed for the amount of time specified in your policy, your Travel Delay and Missed Connection coverage should kick in as well. As always, consult your policy for the specific coverage terms. And contact our Customer Service team for assistance in selecting and understanding your plan: (800) 937-1387 or info@travelinsure.com.