The early bird gets the vacation time: National Plan For Vacation Day 2019
Celebrate Her History, Empower Her Future

February marks Black History Month, a month long celebration of the contributions, accomplishments, and struggles of African Americans throughout history.  Across the nation, there are countless memorials, monuments and historic sites honoring African American culture and influence.  In honor of this celebratory month, Travel Insurance Services has created a short list of travel destinations for the whole family. 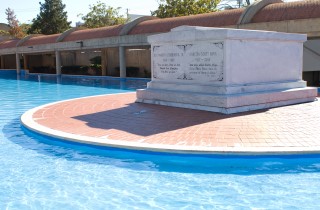 “I have a dream that my four little children will one day live in a nation where they will not be judged by the color of their skin but by the content of their character.”  Dr. Martin Luther King, Jr. is the famed civil rights activist credited for his leadership during the American Civil Rights Movement.  In honor of his life and accomplishments, Martin Luther King National Historic Park is established in his home city of Atlanta, GA, attracting crowds of American as well as international visitors.  The historic site, recently raised up to a National Historic Park status as of 2018, includes the visitor center, Dr. King’s childhood home, his grave site, Ebenezer Baptist Church (where both he and his father served as pastors), "I Have A Dream" World Peace Rose Garden, Fire Station No. 6, the Behold Monument, and The King Center.  According to the National Park Service, the Park is considered a top Atlanta tourist destination.  For more information about the Martin Luther King Historic District, visit the website here. (Photo Editorial credit: Steven Frame / Shutterstock.com)

The Underground Railroad was more than a series of paths leading African Americans  northward, it was a physical progression representing the treacherous journey to freedom. Today, that harrowing journey embarked on by countless African Americans is commemorated by the Underground Railroad Heritage Trail located in New York, which was considered a “major destination” for those seeking freedom.  Before hitting the trail, be sure to check out the National Park Service’s National Register Travel Itinerary for a list of museums, memorials, and historic sites on this trail and along similar historic trails in many other states.  As an example, one such historic site is Plymouth Church of the Pilgrims located in Brooklyn, NY. This church was a focal point of the antislavery movement in the years leading up to the Civil War.  For more information about the New York Underground Railroad Heritage Trail, click here. (Photo Editorial credit: Leonard Zhukovsky / Shutterstock.com) 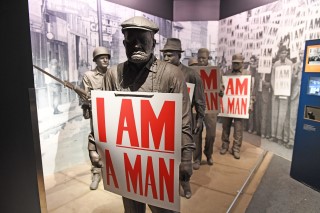 The National Civil Rights Museum is an important hub tracing Civil Rights throughout American history, with its own brick-and-mortar foundation standing upon history itself.  The museum itself is situated on what was once the Lorraine Motel- the location where world famous activist Dr. Martin Luther King, Jr. was tragically assassinated in April of 1968.  The National Civil Rights Museum contains 260 artifacts, over 40 films, interactive media exhibits and more.  The numerous exhibitions trace history “from the beginning of the resistance during slavery, through the Civil War and Reconstruction, the rise of Jim Crow, and the seminal events of the late 20th century that inspired people around the world to stand up for equality," according to the museum’s website.  To learn more about the museum and/or to plan your visit, check out the website here. (Photo Editorial credit: Gino Santa Maria / Shutterstock.com) 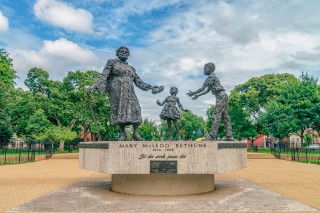 The largest of the Capitol Hill Parks, Lincoln Park celebrates the freeing of African American slaves and the progress of the Civil Rights Movement.  The park is home to the famed Mary McLeod Bethune memorial, which is credited with being the first monument in the nation to honor a black woman in a Washington D.C. public park.  Her memorial shows Mrs. Bethune handing her legacy to two children.  Additionally, the park’s namesake, President Abraham Lincoln, has a memorial depicting his likeness holding the Emancipation Proclamation before an African American kneeling in front of him donning broken chains.  Today, Lincoln Park is considered a major destination for tourists visiting Washington D.C.  To plan your trip and/or to learn more about the park’s monuments, check out the website. (Photo Editorial credit: Valerii Iavtushenko / Shutterstock.com ) 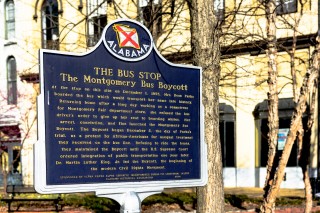 Owned and operated by Troy University, the Rosa Parks Museum commemorates the life of American Civil Rights activist Rosa Parks.  Mrs. Parks sparked the start the Montgomery Bus Boycott by refusing to give up her bus seat to a white man on December 1, 1955.  She was arrested and found guilty, inciting others to form the movement that would change the legality of segregation on public transport.  Her influence, and that of the Montgomery Bus Boycott, during the Civil Rights Movement was invaluable.  Today the museum’s mission states: “Our mission is to honor her legacy and that of the boycott by providing a platform for scholarly dialogue, civic engagement and positive social change.”  For more information about the museum, visit the website here. (Photo Editorial credit: JNix / Shutterstock.com) 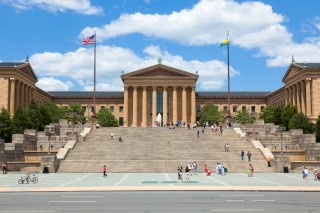 Rising above the Schuylkill River, facing the birthplace of the United States, the Philadelphia Museum of Art is an iconic Philadelphia landmark that has gained international recognition.  The third largest art museum in the nation, this museum’s design as it stands today was led by chief designer and the first African American to graduate from the University of Pennsylvania’s architecture school Julian Abele.  To plan your trip to the museum, visit the website here.  This museum is one of the many reasons USI Affinity is proud to call Philadelphia home! (Photo credit: Samuel Borges Photography / Shutterstock.com)

This list is only a snapshot of the numerous parks, monuments, historic sites and memorials nationwide paying homage to Civil Rights activism and African American history.

Posted at 11:45 AM in Vacation Destinations | Permalink | Comments (0)