Ready to “Sham-rock” and Roll this St. Patrick’s Day?
Female and Solo, Will Travel

St. Patrick’s Day: The story at the end of the rainbow

St. Patrick’s Day: The story at the end of the rainbow 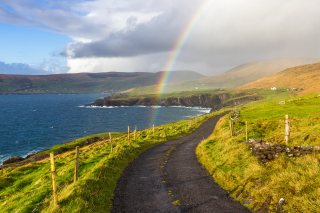 Chasing rainbows, searching for mythical leprechauns and pots of gold, counting the leaves on clovers— these are all images that come to mind when St. Patrick’s Day comes bounding in on an Irish jig. March 17th marks the green clad, Irish born holiday celebrated internationally with everything from green dyed rivers to parades touting river dancers. However, many of the commonplace ‘traditions’ upheld today are fairly recent developments when compared to the history of the holiday.

To understand St. Patrick’s Day, it is important to know the man behind the holiday. In the late fourth/early fifth century, there rose to fame the Catholic patron saint of Ireland—St. Patrick. Though dubbed the patron saint of the Emerald Isle, St. Patrick was born not in Ireland but instead to an upper class family in Roman Britain. As a teenager, he was kidnapped and forced into slavery under a Celtic priest in Northern Ireland until his escape approximately six years later. It is said that during this time of slavery, he furthered his spirituality and Catholic faith, plus learned the Irish language--both of which would help shape not only his future but that of Ireland. As a testament to his faith, it is in his famed autobiography “Confessio” that St. Patrick details his dreamed encounter with an angel who encouraged him to escape his slavery.

Not long after he escaped Ireland back to his family, Patrick joined the priesthood. Eventually, he made his way back to the land of his enslavement. At that time, Ireland’s Celtic religious beliefs were well ingrained into the country’s culture. However, Patrick defied these traditions repeatedly with his missionary work and is credited with spreading the Christian faith across Ireland. St. Patrick’s legacy is surrounded by many stories, such as his use of Ireland’s native shamrock to explain the concept of the Holy Trinity to his audience. He is also credited with driving the ‘snakes’ from Emerald Isle, which is now widely accepted as a symbol for his driving paganism from the country.

Today, 78.3% of Ireland’s population is Roman Catholic, according to the 2016 Census of Population from the Central Statistics Office.  With such a high percentage of the population identifying as Roman Catholic, St. Patrick’s Day is a widely celebrated occasion held on March 17th—the supposed anniversary of St. Patrick’s death. In addition the holiday named after the patron saint, there are numerous historic sites, such as the Rock of Cashel and the Hill of Slane, to commemorate the many stories of his missionary work around Ireland.

St. Patrick’s Day has been celebrated in Ireland as a religious holiday for Catholics for over 1,000 years. However, it has not always been celebrated with the same parades and festivities that are commonplace today. According to History, the very first St. Patrick’s Day Parade was held in New York City in 1762. This first parade “was comprised of a band of homesick, Irish ex-patriots and Irish military members serving with the British Army stationed in the colonies in New York,” according to the NYC Saint Patrick’s Day Parade website. “This was a time when the wearing of green was a sign of Irish pride but was banned in Ireland. In that 1762 parade, participants reveled in the freedom to speak Irish, wear green, sing Irish songs and play the pipes to Irish tunes that were meaningful to the Irish immigrants of that time.”

These early celebrations soon extended to other major American cities, including Philadelphia, PA and Savannah, GA, and many still endure. To this day in the U.S., St. Patrick’s Day is considered a time of celebration as well as one of reflection. The holiday has become a tribute to the Irish who came to the U.S. in search of a better life.  As a part of tradition started in 1952, every year the Irish Taoiseach, which is Ireland’s title for its head of government, pays a visit to the President of the United States around St. Patrick’s Day in honor of the significant role the Irish have played in shaping America’s history. In 2018, President Donald Trump declared March to be Irish-American Heritage Month writing the following in his statement: “For centuries, the tenacious Irish spirit, paired with American self-reliance, has helped Irish immigrants and their descendants realize incredible dreams.”

Eventually, these Americanized festivities born out of a sense of pride for those Irish displaced from their homeland in America made their way back across the pond. Though St. Patrick’s Day became a national holiday in Ireland in 1903, progression on the types and scale of festivities were slow to develop over the following decades. It was not until the mid-1990s that the Irish government launched its first official multiday festival in an effort to increase tourism. This festival has since become an annual tradition attracting thousands of spectators.

Check out our last blog post here for our top picks on where to celebrate.